EFT, also known as “Tapping” and short for “Emotional Freedom Techniques,” is an evidence-based self-help and clinical tool which is like a psychological form of acupuncture, but without the needles. It combines traditional Western Psychotherapy with Acupressure and consists of tapping with your fingertips on specific acupuncture points called meridians or energy channels while talking through a wide range of negative emotions, beliefs, or thoughts. When these emotional issues are combined with physical stimulation of meridian points, the body and mind appear to work together to help heal many psychological and physical problems.

EFT is one of the most powerful bridges between our conscious and subconscious mind, and our physical body. Applying EFT helps the body mind to process, integrate, and facilitate balance which allows healing to occur.  By bringing together the powerful brain functions of intention and reasoning, expressed through language, with the physical act of tapping on the points, we are sending signals to the parts of the brain that govern survival instincts, known as the fight- or-flight response. This allows us to release imbalances in a way that is gentle, safe and healing. In addition, the exciting  new biology of epigenetics (the study of how environmental factors can switch genes on and off and directly affect our well-being) has proven that cells are responsive to their environment whether psychological or physical- which is where EFT and nutrition come in.

Research has shown that thought originates in the brain as a result of neuronal firing and this generates a measurable electromagnetic field (1). The theory behind EFT is that negative thoughts disrupt the body’s energy system. In turn, the body interprets such disruption as a negative emotion. EFT targets the intervening step, aiming to correct the energy imbalance by removing the emotional charge from the original thought, belief, emotion or memory.

Think of energy disruption like a TV with a short in a wire. The effect of this short is a ZZZZT (as described by EFT founder Gary Craig) on the image seen on TV. The impaired flow of electricity causes the problems with the TV image. When the flow of energy is disrupted in people, some parts of the body experience a shortage of energy and others too much. The physical EFT tapping with the tips of the fingers on acupuncture points clears this ZZZZT. In this way the energy travelling through these channels is balanced again and flows freely throughout the body.

EFT is similar to Nutritional Therapy in that it empowers you to become an active participant in the management of your well-being.

Please remember that EFT isn’t a substitute for medical diagnosis.

Research has begun to establish an observable scientific basis for the subtle energy system on which EFT is based. Numerous studies have shown that the acupuncture meridians on which we tap are no longer imaginary lines, but tiny threadlike anatomical structures that physically exist. Meridians are the channels along which energy circulates through your body. Research also shows that stimulation (such as with tapping) of the acupuncture points is effective whether needles are used or not (1).

EFT has been established as an “evidence-based” practice in research studies that meet APA standards- the most influential set of standards in the field of psychology, as set up by Division 12 of the American Psycho- logical Association (APA) (2). Please read here for extensive peer-reviewed research www.eftuniverse.com

So, how does EFT actually work?

It works by literally rewiring your brain’s connection to food and emotions. There’s a law called Hebb’s law which says that neurons which fire together wire together. If you have a recurring negative thought, the neuron, which carries the pulse of the thought, connects with other neurons and the bundle of neurons gets thicker and thicker. After you’ve repeatedly thought the same negative thought for years you’ve built a huge neuronal bundle to deal with that issue.  When you do EFT you activate that neural bundle, and the body gets a different signal- namely that it’s safe. This then de-activates the conditioned neuronal stress response triggered by the negative thought, and replaces it with a neutral response instead.

A recent research review (3) suggests that tapping on acupressure while a presenting emotional problem is mentally activated rapidly produces desired changes in the neurochemistry involved in that problem:

“Bringing to mind an emotional trigger, problematic scene, or unresolved traumatic memory activates the amygdala (a part of the brain which plays a key role in the processing of emotions), arousing a threat response. Stimulating selected acupoints, according to Harvard studies, simultaneously sends deactivating signals to the amygdala.

Repetition of the physical intervention resolves these opposing signals by reducing the arousal while the trigger is still mentally active. The hippocampus (a region of the brain that is associated primarily with memory) records that the memory or trigger is being safely engaged without a stress response, and the neural pathways that initiate the associated stress response are permanently altered.

Here are some tips to help you achieve the right technique:

Now, tap 5-7 times each on the remaining eight points in the following sequence: 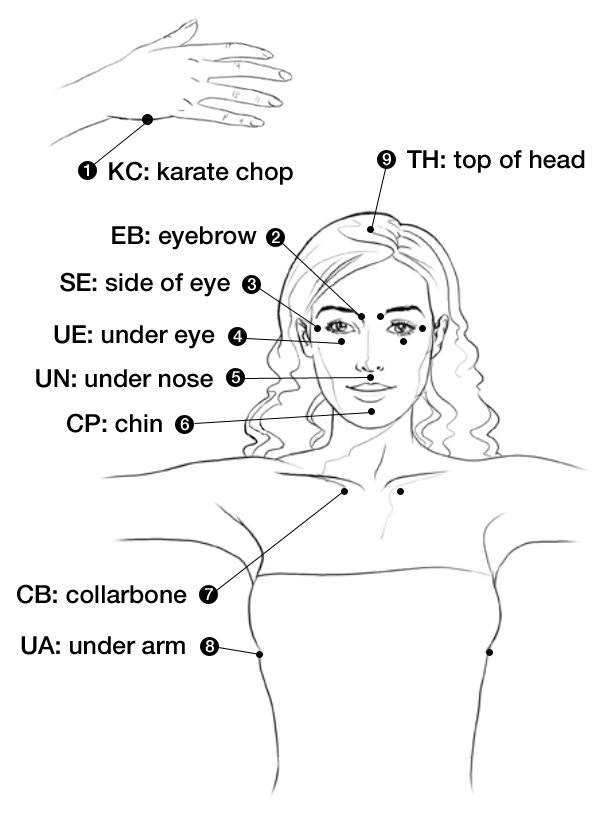 Head (TH)
The crown, center and top of the head. Tap with all four fingers on both hands.

Eyebrow (EB)
The inner edges of the eyebrows, closest to the bridge of the nose. Use two fingers.

Side of eye (SE)
The hard area between the eye and the temple. Use two fingers. Feel out this area gently so you don’t poke yourself in the eye!

Under eye (UE)
The hard area under the eye, that merges with the cheekbone. Use two fingers, in line beneath the pupil.

Under nose (UN)
The point centered between the bottom of the nose and the upper lip. Use two fingers.

Chin (CP)
This point is right beneath the previous one, and is centered between the bottom of the lower lip and the chin.

Collarbone (CB)
Tap just below the hard ridge of your collarbone with four fingers.

Underarm (UA)
On your side, about four inches beneath the armpit. Use four fingers.

Head (TH)
And back where you started, to complete the sequence.

As you tap on each point, repeat a simple reminder phrase, such as “my anxiety” or “my interview” or “my financial situation.”

Now take another deep breath! Now that you’ve completed the sequence, focus on your problem again. How intense is the anxiety now, in comparison to a few minutes ago? Give it a rating on the same number scale.

Note: This approach is different from traditional “positive thinking.” You’re not being dishonest with yourself. You’re not trying to obscure the stress and anxiety inside yourself with a veneer of insincere affirmations. Rather, you’ve confronted and dealt with the anxiety and negative feelings, offering deep and complete acceptance to both your feelings and your self. Now, you’re turning your thoughts and vibrations to the powerful and positive. That’s what makes Tapping so much more effective than the “positive thinking” techniques that many of you have already tried. It’s not just a mental trick; instead, you’re using these positive phrases and tapping to tune into the very real energy of positivity, affirmation, and joy that is implicit inside you. You’re actually changing your body’s energy into a more positive flow, a more positive vibration.

Here are some example phrases to guide you:

“I have faith in my ability to change.”
“I am joyful about these positive changes.”
“I am accomplishing so much.”
“I enjoy the calm and peace that I have.”
“I love the person that I am.”
“I am becoming a more relaxed and joyful person.”

You can use these positive phrases with the same tapping points and sequences described above.

Sometimes people find it difficult to pinpoint exactly what they want to work on, and this is no problem; issues don’t all have to be “figured out” in advance of your visit because part of the artistry of EFT is that by working on one particular issue EFT often shows us where we need to explore next.

Although some problems can dissipate within just one session, usually issues are more complex and present numerous different “aspects” to be worked through. Sometimes an issue arises during EFT which becomes more significant than whatever the client originally intended to work on. Sometimes problems that seemed enormous dissolve as a by-product of working on another issue. None of these factors can be predicted at the beginning of the session- they are part of the elegant simplicity and brilliance of EFT.

You are also encouraged to use the techniques on their own between visits, although it is certainly not compulsory. This can accelerate the process and is also very empowering because it allows you to become an active participant in the management of your well-being.

After your visit– you can expect to discover new insights and perspectives, feel lighter and more relaxed, and to have a new emotional first-aid tool you can use for the rest of your life.

Based on the Tapping Solution